...but we must be all in one dress and one colour: this is a silly poor Gospel
M Fox  Quaker Faith and Practice 5th Edition: 20.31

The present meeting house, Pagefield House, was bought by the Quakers in 1966, and opened in 1967 after some building work. It is the sole survivor of many large houses with substantial front gardens that originally lined both sides of Kingsway and the north side of St Helens Road when the area was developed in the mid-nineteenth century. The garden, as well as the Tudor revival architecture of the building, was responsible for the property being Grade II listed.

However, throughout our first half-century of occupation, the garden was unfenced, having no doubt lost its original iron railings to some wartime metal collection. This greatly limited what we could do with it. Most of the area was lawn, with a hedge on the Page Street side and a steep bank descending to a low wall above St Helens Road. Uninvited visitors, often intoxicated, had free access; there were problems with litter and vandalism. Nevertheless, we were sometimes able to put the garden to one characteristically Quaker use - it was an excellent location to hold silent vigils, for peace and, more recently, for equality.

"Equality, Respect, Goodwill to All" vigil with Swansea City of Sanctuary, October 2009

There was also a first gardening effort: in 2012 the Quaker Children's Meeting created a small bed of wildflowers at the top of the bank.

By 2010, moves were under way to get railings reinstalled round the garden. Eventually we had a design, planning permission, and finally a grant, and construction began. The railings were completed in October 2016. Now the creation of a proper garden could begin. From the start, this has been carried out in the awareness that it is part of our Quaker witness to sustainability.

A condition of the grant, from WREN, was that we involved people who were part of our local community in the development and use of the garden. Initially we worked with a group of young people from the YMCA just across the road. They sowed wildflower seeds on the bank and helped create a herbaceous border alongside Page Street, in which fruit trees were also planted. We built planters along the top of the bank and planted strawberry plants and others. By September 2017, when a grand public opening of the garden with the Mayor was held, the garden was already thriving and there were even some apples on the trees. 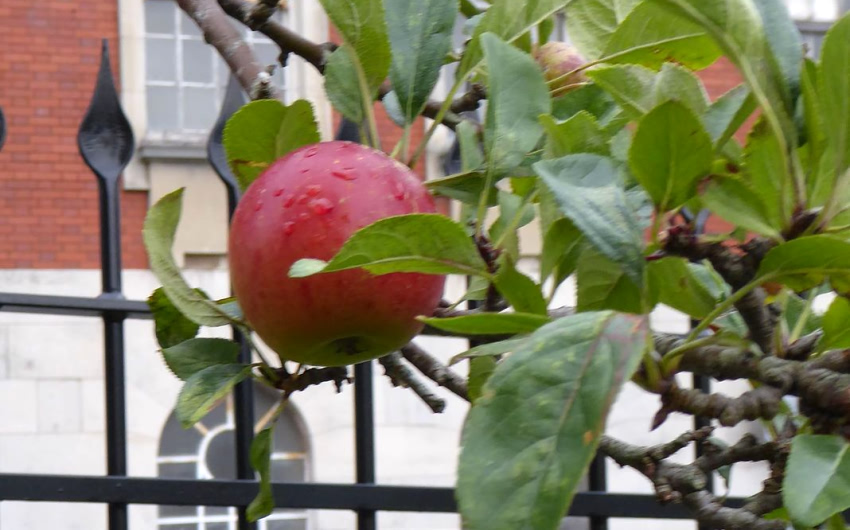 Meanwhile, the YMCA got a grant from Fruit-full Communities, which they chose to devote to fruit trees and shrubs for our garden. Fruit-Full Communities and the young people now built a new raised bed adjacent to the planters and filled it with an assortment of berry-bearing bushes. Fan-trained apple trees were planted along the western boundary and three free-standing fruit trees on the lawn. Numerous daffodil bulbs were also planted on the lawn.

In Spring 2018, a keyhole garden was built, as part of a project linking Swansea Meeting with the town of Kumbo in Cameroon, where one of our members has been working as a volunteer with a local NGO. There, they have been built outside schools to help children learn about growing food. Ours has been used very successfully to grow herbs. 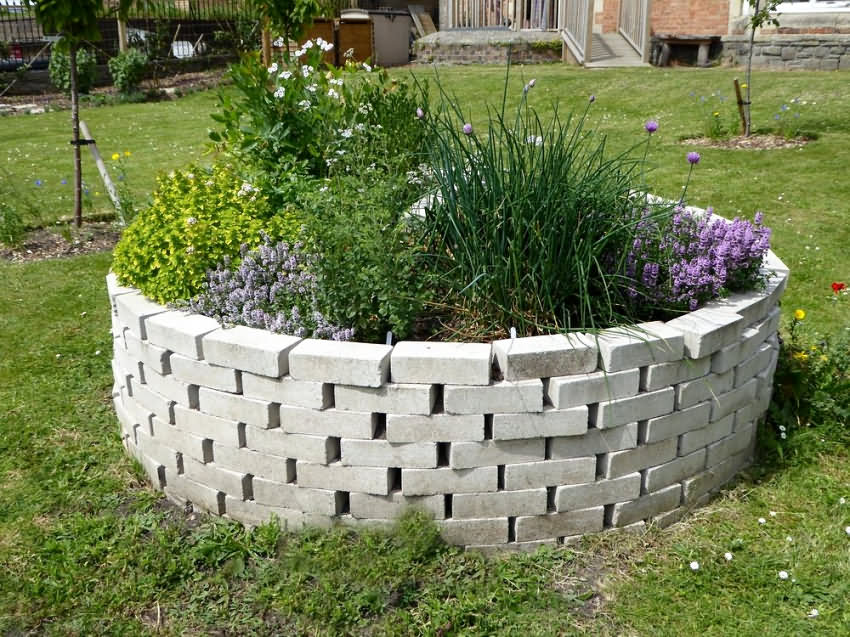 Augmented by the arrival of a trained garden designer, the garden group now set about planning a colour scheme - largely rich reds, oranges, and blues - and a layout, with extended beds. "No dig" gardening methods were introduced - enhancing the soil condition by adding organic matter to the surface and letting the natural soil flora and fauna gradually incorporate it into the soil, mimicking the natural cycle. Mushroom compost and garden compost from our bins were added to all the beds. The fruit bushes were moved to a new permanent home with more space, freeing the raised bed for growing vegetables, and a frame was installed to train the apple trees on the western boundary.

The raised bed, wildflowers on the bank beyond, July 2019

In 2020 the garden group started working with Women4Resources in a project to help asylum seekers and refugee women grow their own vegetables and herbs. The women chose seeds to sow in the raised beds, so as to have free, fresh produce. For an account of the first year of this very successful project, see https://swameandspolicy.wordpress.com/swansea-lm/.

During these times our Children's Meeting are not currently taking place. We hope to be able to restart them soon.

Please arrive 10 - 15 minutes before the start of Meeting for Worship to give yourself time to catch your breath, say your "hellos", and turn off your mobile phone.